Finding the Eras of MTV's The Challenge Through Clustering 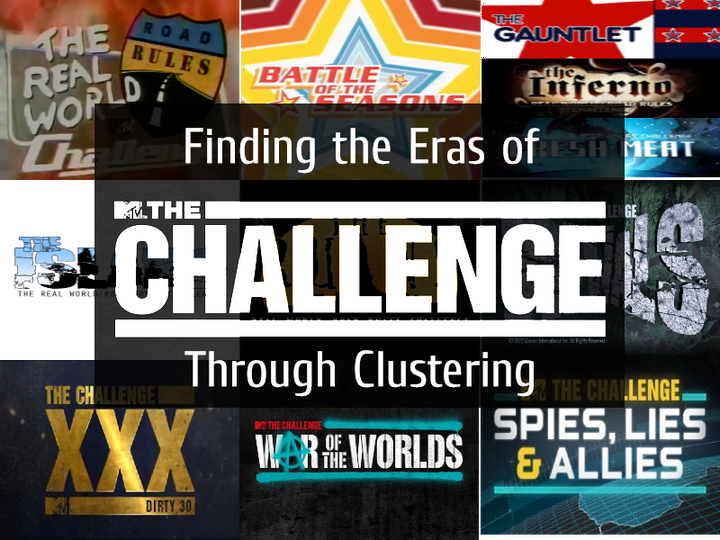 Since 1998, MTV’s The Challenge (formerly the Real World/Road Rules Challenge) has graced the airwaves where it is currently in Season 37. In a prior post I had mentioned that this is one of my guilty pleasure shows so this will likely not be the last post that is based around America’s 5th professional sport.

For casting the show, the early years revolved around having alumni from MTV’s The Real World and Road Rules compete against each other (in an odd bit of irony or misnaming, the first season called Road Rules: All Stars actually consisted of only Real World alumni). Over the next 37 seasons, the series has evolved bringing in other MTV properties such as “Are You the One?” and expanding internationally to properties like “Survivor: Turkey” and “Love Island UK”.

Since the cast of characters has continuously evolved over the 37 seasons, I thought it would be interested to see if I can algorithmically classify the eras of the show based on the cast of each season through Hierarchical Clustering and visualizing using UMAP.

Since the goal is to cluster the seasons of the The Challenge based on similarity of their casts, I need to get the cast list from each of the 37 seasons. Fortunately, Wikipedia contains the casts within each season’s page. Unfortunately, I’m lazy and really don’t want to specifically hunt down the URLs for each of 37 seasons and write individual rvest code.

So I’ll use the Seasons table on Wikipedia to act as a driver file for each season’s page using rvest to extract the table using its xpath, pulling out all of the anchor elements (<a>), using html_attrs() to extract all of the attributes into a list and using purrr’s map_dfr function to combine all of the links into a list. Unfortunately, there are multiple links on row of the table (one for the title and one of the location of the season), so using stringr’s str_detect, I’ll keep only the rows that has the word “Challenge” in the title. Or “Stars” in the case of the first season which was just called “Road Rules: All-Stars”.

The dataset now has the Wikipedia link for each season in the href column and a more human-reading title in the title column.

For example, the default was where the two tables to extract were the 3rd and 4th tables on the page and I only needed the first column.

With this additional metadata, I could now write a function to read the URL and extract the correct tables and table columns:

The five parameters passed to this function are all contained in the driver file created above. In order to iterate through the seasons to create a data set of the cast members I’ll use the pmap_dfr() function from purrr to provide more than two inputs to a function (pmap vs. map and map2) and combine all the outputs into a single data frame by binding the rows (the dfr part of the function name).

The results of this new table now looks like:

Cleaning the Data and Final Preparations

The data on Wikipedia is fairly clean but there are places where automation is no substitute for domain knowledge. In this case the cast tables refer to what people were called in that specific season. But in some cases as cast members have returned for multiple seasons what they have been called has changed. For example. the now host of NBC’s First Look, Johnny “Bananas” Devenanzio, began his time on The Challenge as “John Devenanzio”, then “Johnny Devenanzio”, and finally, “Johnny ‘Bananas’ Devenanzio” for his most recent 12 seasons. Some female cast members married as “Tori Hall” became “Tori Fiorenza”. And in the most subtle of changes, “Nany González” appears both with and without the accent over the “a” (huge shoutout to the r/MtvChallenge sub-Reddit for calling me out on that when it cause Nany to not appear in my data visualization).

Other changes are less interesting such as removing footnotes from people’s names, fixing that in the Seasons table both Season 5 and Season 23 are called “Battle of the Seasons”, and appending the season’s names onto the cast table

Before getting into the real meat of the analysis, I’m going to do some quick EDA to answer some potentially interesting questions about The Challenge Cast that we can see in the data.

Who Has Been on the Most Challenges?

A quick question might be what challenger has been on the most seasons. This can be answered pretty quickly with the count() function from dplyr. 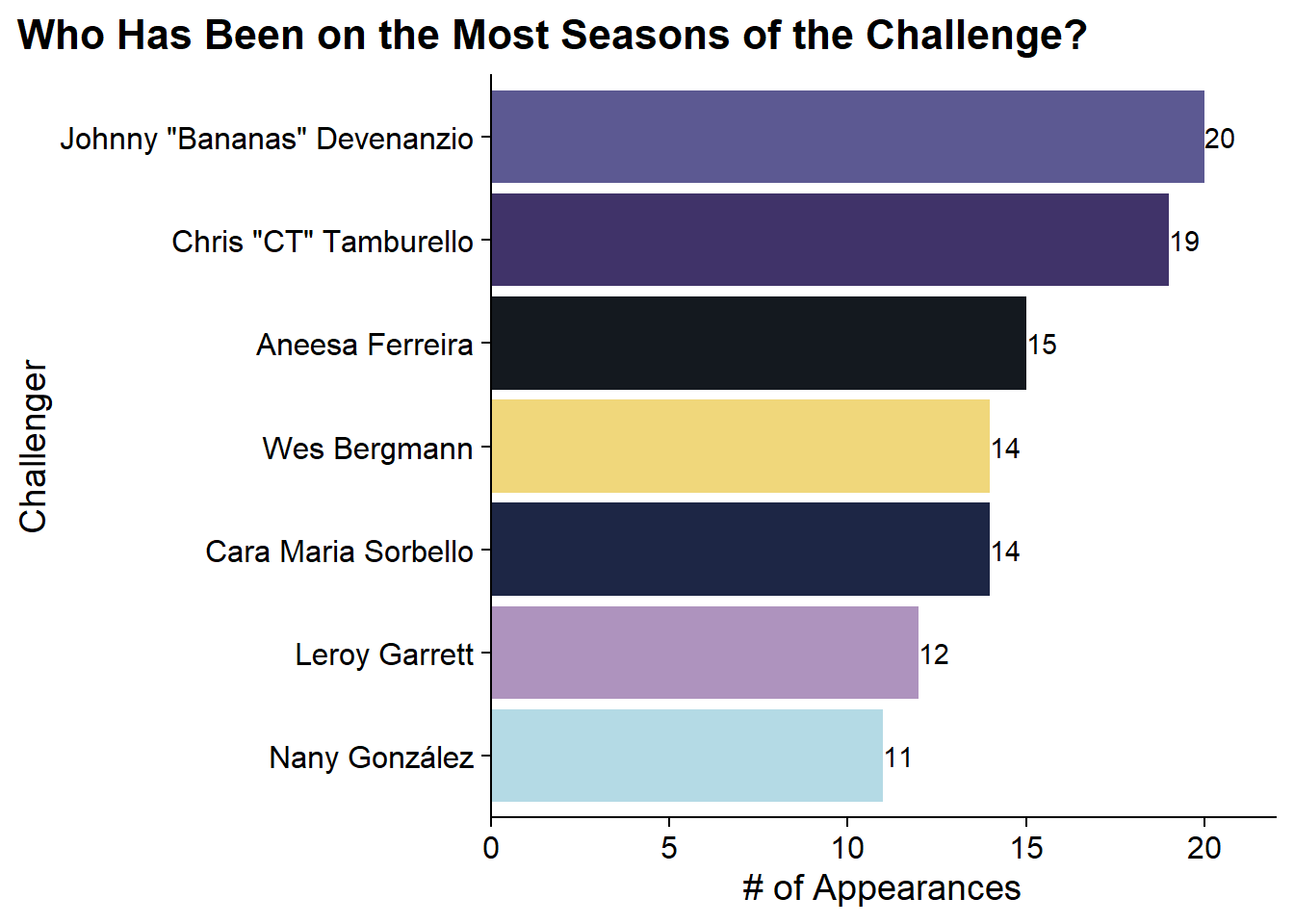 As any Challenge fan knows, Johnny Bananas has been on the most seasons with 20 and CT just behind at 19.

An interesting visualization we can do is to explore how frequently Challengers are on consecutive seasons using a series of dumbbell plots. In this plot there will be a point for each endpoint of a stretch of consecutive seasons and they will be connected by a line.

Check out the post on the r/MtvChallenge sub-Reddit for a nicer (although slightly wrong) version of this plot. 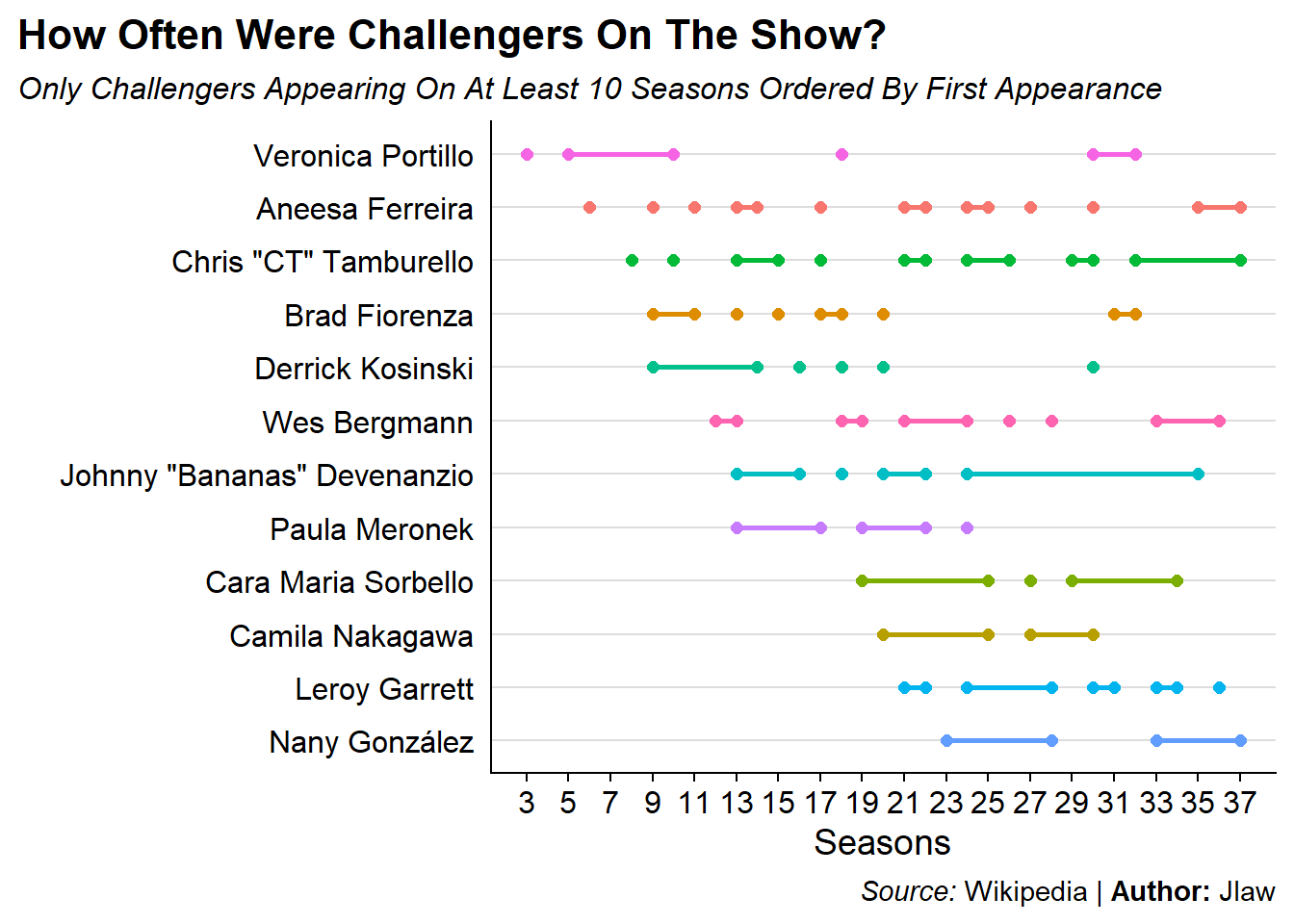 Which Seasons Had the Highest Percentage of “one and done” Challengers?

Sometimes the show will bring a cast member on and it doesn’t work out and you never see them again. I can also look at which seasons had the largest number of cast members who were never seen again. Since Season 37 is still airing and we don’t know who will / won’t come back, I’ve excluded that season: 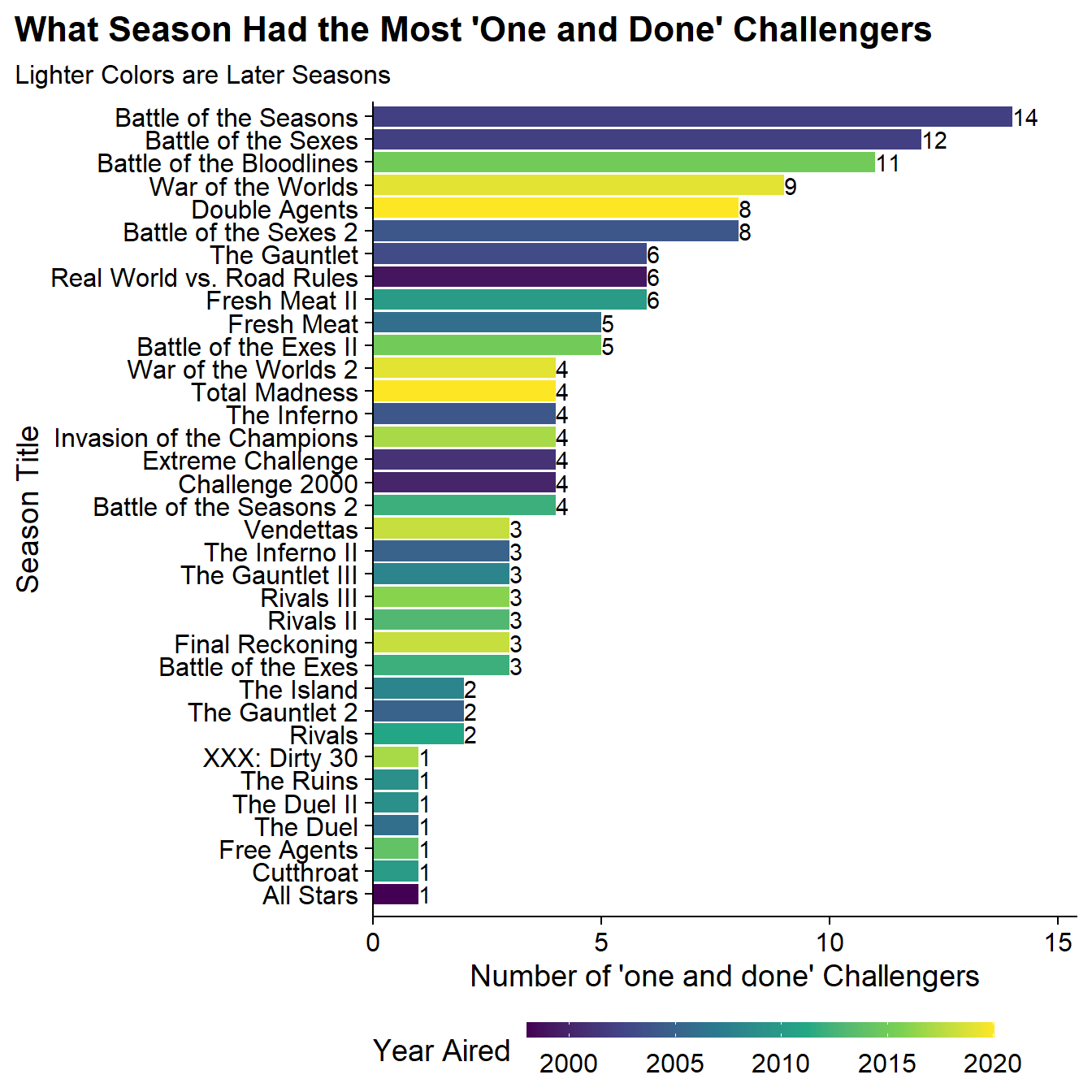 The seasons with the largest number of one and done’s tended to be seasons where the shows had large influxes of new challengers due to different formats. Battle of the Seasons was a very large cast and the first to not have small teams. Battle of the Bloodlines was a concept where 50% of the challengers were family members who had never been on the show and thankfully never were again.

What Are the Most Similar Episodes of the Challenge?

I can visualize season similarity in a network graph, however, I need to first restructure the data. Right now I just have all the positive cases but I need to build data that has every person/season combination with 1/0 indicators. Then I can use the pairwise_similarity() function from widyr to get the cosine similarity of each season. The upper=F setting makes it so there’s only 1 row for each combination (e.g, only A, B rather than both A,B and B,A):

The most similar seasons in the data are Vendettas (Season 31) and Final Reckoning (Season 32) which makes sense as these were consecutive seasons that were also the last two pieces of a trilogy.

The similarity threshold of 0.29 was chosen judgmentally to include as many seasons as possible without over-complicating the graph. The next step in building the network graph itself. I’m setting a seed since the layout in ggraph is non-deterministic and I’d like to make it reproducible. The similarity data frame is converted to a tbl_graph object with as_tbl_graph, I join in the short titles to from the labels and then set edges to have alpha values (transparency) tied to similarity and use the names for the node labels. 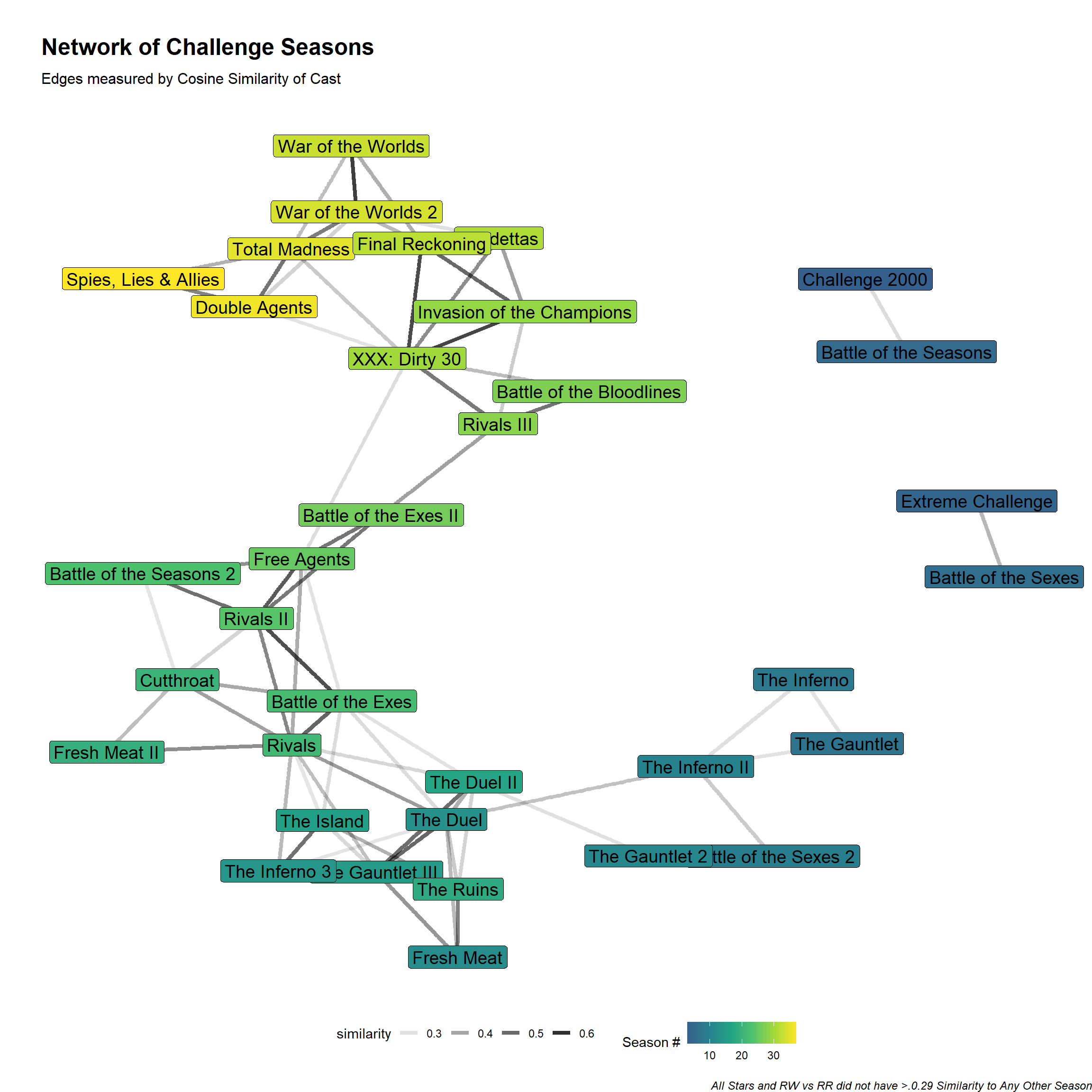 Through the network graph we can see that the first two seasons aren’t connected to anything and don’t appear and then Seasons 3 and 5 and Seasons 4 and 6 exist in their own clusters. But the rest of the structure you can trace from early seasons to later season.

Clustering the Seasons with Hierarchical Clustering

Now that EDA is done, its time to determine our eras through clustering. In order to use hierarchical clustering I need to create a distance matrix. To do so I will replicate some of the code from above where each row will be a season and each column a Challenger and the value will be either 1 if they were on that season or 0 otherwise.

Since this data is binary I will be using a binary distance where 1 and 1 is a match and any 1/0 pair is a mismatch (e.g, 0 and 0 despite being the same value does not count as similarity). The definition is the proportion of bits in which only one is on among those where at least one is on.

Then the hierarchical clustering algorithm is run with hclust. There are many different agglomeration methods that can be used ranging from single (where difference between clusters is defined by their closest elements), complete (which defines differences by farthest apart elements), average (which is the average of all the points distance), and Ward which is the minimal distance between sum of squares. For more information, see this CrossValidated answer.

I can then visualize the resulting dendrogram using the plot() function and supplying the short_title field I previously excluded as a label parameter. By looking at the dendrogram it seems like there are five clusters which I will highlight with the rect.hclust function and specifying k=5: 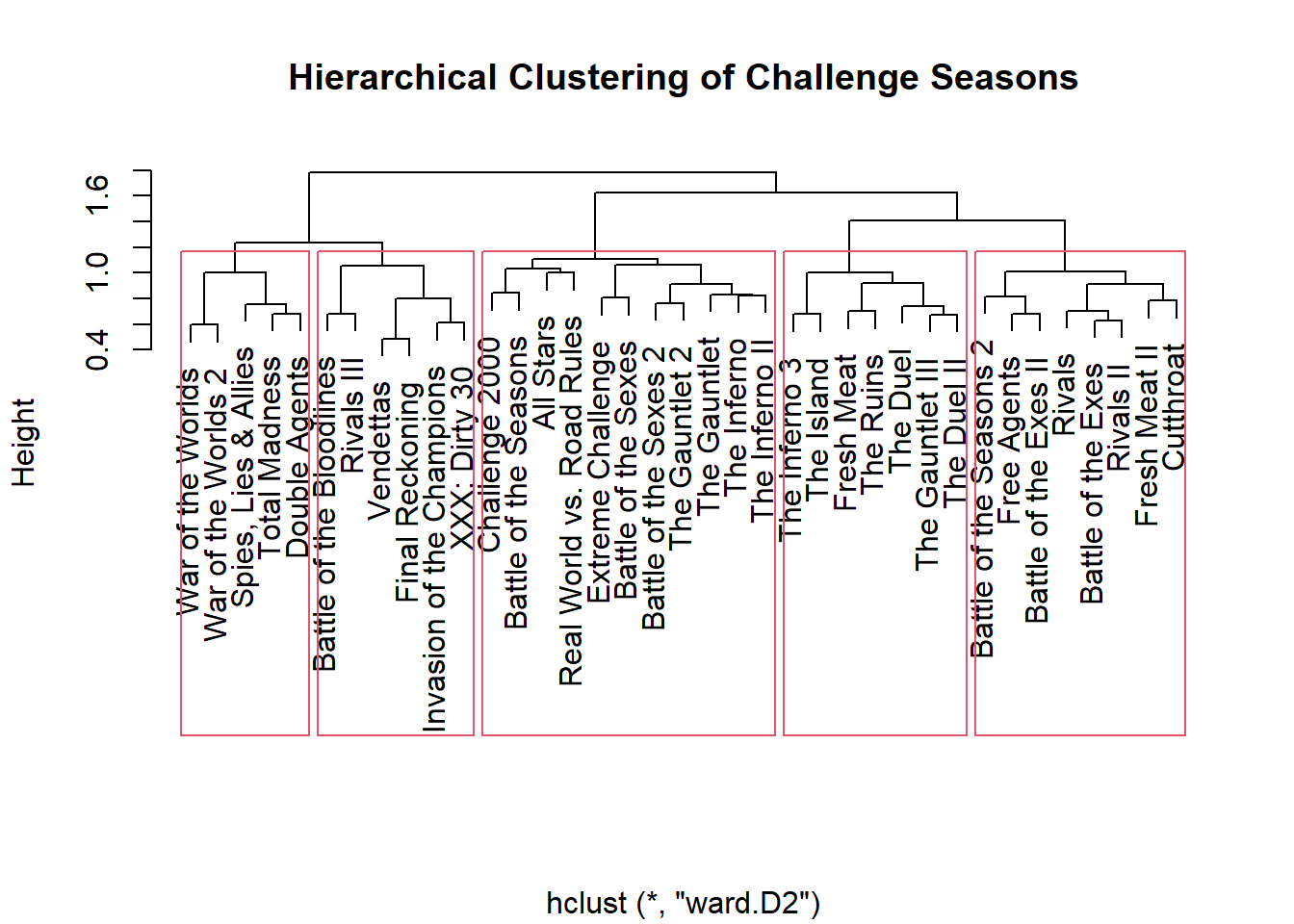 Based on the dendrogram, there are five clusters:

So it seems like the algorithm latched on to change points where the casts became heavily rookies, which would make sense since that is a forced dissimilarity.

Returning to the data I can append the cluster assignment to the orignal data with the cuttree function and providing it the number of clusters to return.

The data set used for the clustering contained 37 rows representing each season of The Challenge and 360 columns representing every challenge who has ever been on the show. This type of data is prime for dimensionality reduction. Uniform Manifold Approximation and Projection (UMAP) is a technique that can be used for dimensionality reduction and visualization similar to T-SNE. The UMAP algorithm can be found in the umap package.

Running UMAP is pretty straightforward with the umap() function and here I give it the very wide data set used for clustering. In the returned object there is an element called layout which contains the compressed two dimensional space returned by UMAP. Again I’m setting a seed as the results of UMAP can be non-deterministic.

I can add then those dimensions to the clustering results from above to see how closely the UMAP compression will match the clustering from the hclust function: 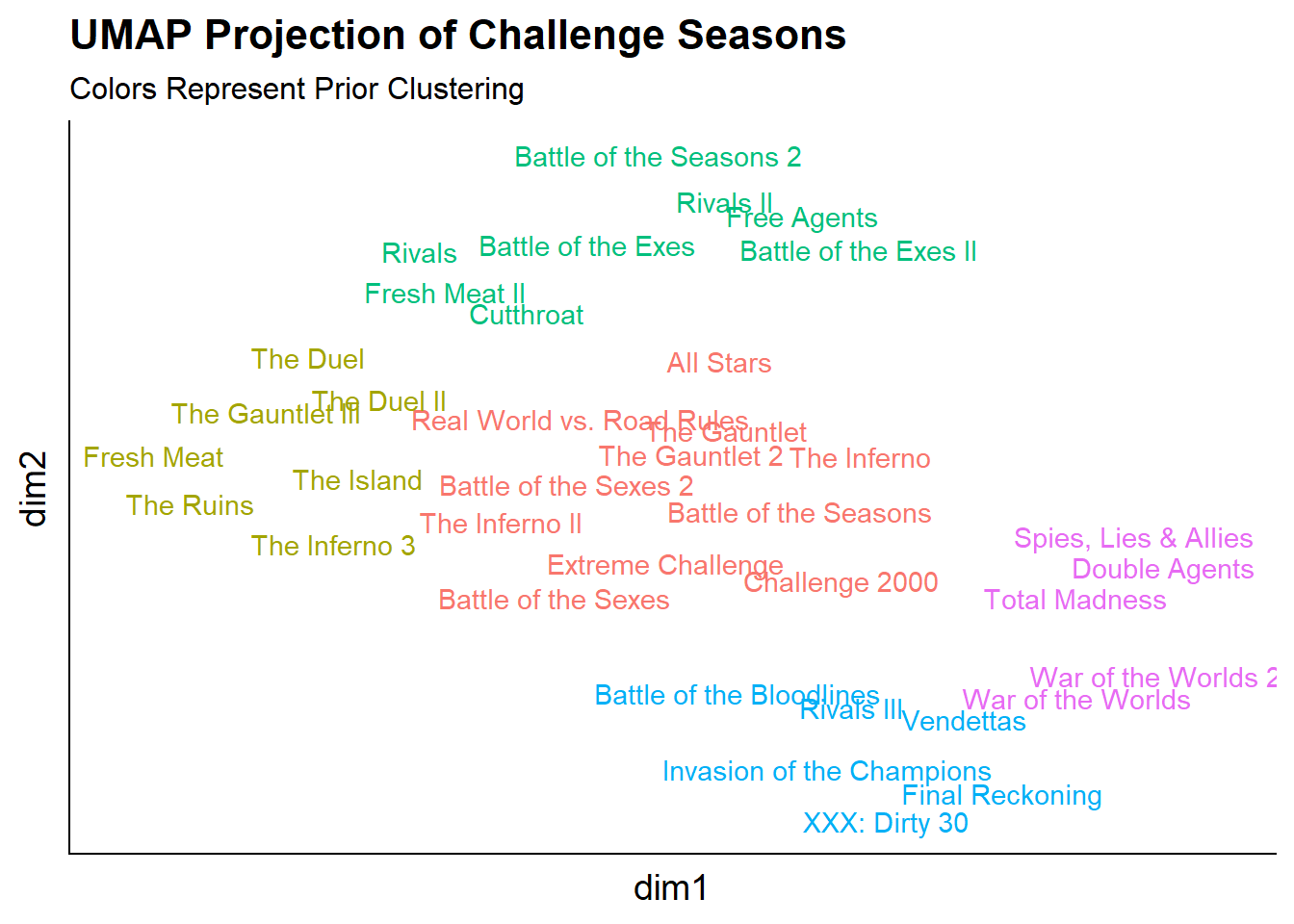 Overall, the UMAP projection captures similar information to the clustering since both methods were unsupervised and the colors (the prior clusters) are very close in the UMAP projected space.

In the summer of 2020, The Challenge: All Stars aired on Paramount+. The series was intended to bring back fan favorites from early seasons of the challenge (although whether the actual cast would be considered fan favorites, all-stars, or even from early seasons was debatable). An interesting final question to ask is: what cluster would The Challenge: All Stars belong to in the UMAP space?.

This next block of code is going to do a lot of heavy lifting but isn’t dissimilar from what was done in the earlier parts of this post. I will be downloading the cast from Wikipedia, cleaning it (more marriages and nicknames), and adding it to the original data set to get the 0 cases and the filtering it back to The Challenge: All Stars season.

Then predicting the All Stars season in the UMAP space can be done similar to other predictions in R with the predict function:

which returns a matrix with 1 row for the season and 2 columns for the UMAP x and y dimensions. Then this can be visualized on top of the original UMAP projection as an annotation. 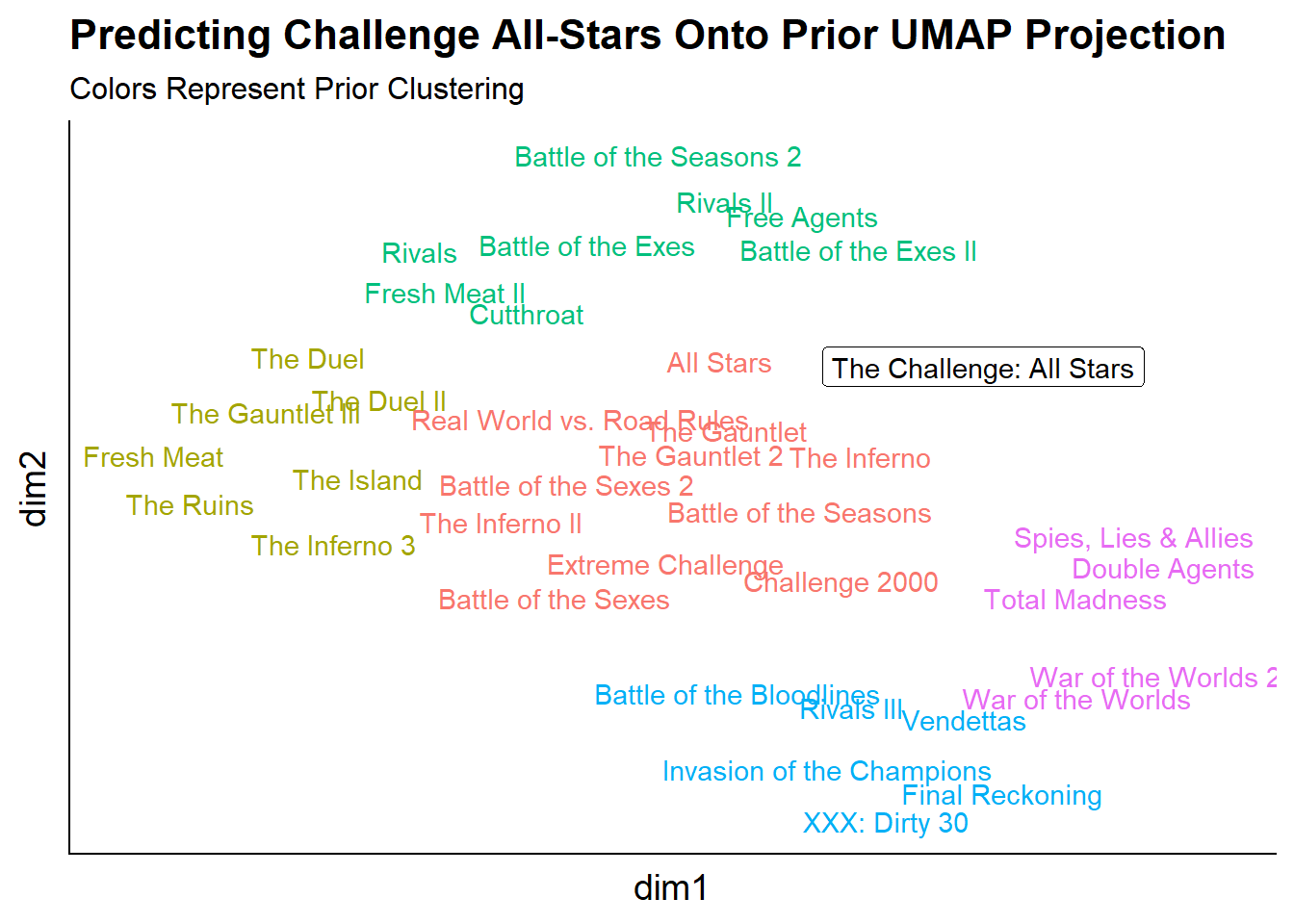 It seems like Challenge All-Stars would be part of the first cluster of the first group of seasons but is somewhat between the “green cluster” which could make sense as there were a couple of cast members on the show who first showed up in the 23rd season (Battle of the Seasons 2).